Study Spanish on Skype with the El Salvador Spanish Schools

We now offer live 1:1 online Spanish lessons with professional instructors via Skype. Contact us for more information... info@salvaspan.com
and schedule your next live video Spanish lesson with us on Skype:
http://salvaspan.com/Mi-Diario-Salvaspan.html 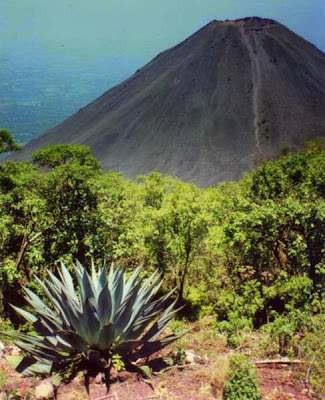 Posted by www.salvaspan.com at 2:49 PM No comments: 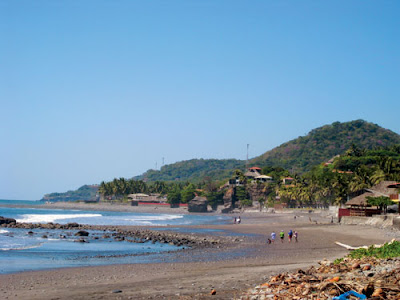 El Salvador may not be a typical destination for American tourists, but offers amazing diversity in geography and history for adventurous travelers.
By Donna Bonnell - July 2009

Are you longing to travel to an exotic place? El Salvador may be just for you. Be prepared, however, El Salvador is not the typical American tourist hideaway.

Not all Central American countries are equal. In 2007, I traveled to Costa Rica and saw a country flourishing in fabulous flora and fauna. I expected a similar experience when I visited El Salvador a year later. Instead, I witnessed a small country struggling for survival.
El Salvador is about the size of Massachusetts. With about six million inhabitants, it is the most densely populated country in Central America. About 90 percent are of mixed Indian and Spanish decent. Residents speak Spanish and most are Roman Catholics.

Because of many years of civil war, this country's economy and environment are in peril. Even though the fighting ended more than a decade ago, El Salvador still suffers from post war paranoia, pollution and poverty. An estimated 25 percent of the children are malnourished and 50 percent of residents are unemployed.

Stripped of natural resources, El Salvador is the second most deforested country in Latin America. Over 90 percent of the original tropical forest is gone, and the ecosystems are some of the most severely threatened on the planet. However, El Salvador is definitely worth saving. Superior surfing, considered as one of the best in the Pacific Ocean, is just one reason.

Ten of us traveled to El Salvador. My friend, Deb, and I (both non-surfers) happily filled last minute vacancies when the group coordinator needed two additional people to receive a discounted rate. El Salvador only has two tropical seasons -- dry (November-April) and wet (May-October) and four surfing seasons (segmented into months based on wave consistency and strength). We traveled in early December. Offering 4- to 6-foot waves, perfect conditions all day long and slightly cooler temperatures, this was the ideal time for our group of mostly novice surfers.

We stayed at Takuani Kal Hotel/Restaurant, a small (six room) tranquil retreat just north of La Libertad on Playa El Tunco. Takuani Kal's construction was inspired by the native culture of the Nahuats.

Yet, armed guards protected the mini paradise 24 hours a day. The fence surrounding our refuge had shards of broken glass imbedded in the top to keep intruders out. For some reason, there was a machete lying against the door in our room. (We never did learn its purpose.) Takuani Kal was safe, but we heeded warnings to proceed with caution beyond its perimeters (especially at night). Enjoying the artwork, watching the rest of the group ride the waves and experiencing spiritual bliss was amazing. After a couple of days, however, we wanted to explore.

Our first of only two trips beyond the safety of Takuani Kal was to an Internet café about a block away. We brought only our drivers' licenses for identification and a couple of bucks to buy time to check e-mail, leaving our passports behind. Those documents were too important to have stolen.

The short midday excursion broadened our knowledge. Branded cattle roamed the roadways. Peasants burned wood for fuel and laundered clothing in the river. Homes were simple, with hammocks strung from the ceilings. Children peddled wares and begged for donations. Dogs scrounged scraps. The sights saddened my soul, but we felt surprisingly safe.

With our confidence raised, we booked a tour with Quiver Surf, a company specializing in creating safe excursions for tourists. Even though I was apprehensive, once we met Cebolla Mendez -- our guide and owner of Quiver Surf -- his wealth of information became my focus. Mendez, a native Salvadorian, avid surfer and middle class business owner, enthusiastically expressed his desire to bring about positive change in El Salvador.

El Boquerón National Park was one of our destinations. The park is located inside the crater of San Salvador Volcano, which is part of a volcanic chain. It is home to local wildlife, rarely seen because of over-hunting. Guard and handrails, designated walking paths and security are in place to attract and protect tourists. The park's posted rules and regulations are enforced. Until recently, safety precautions were almost nonexistent.

We learned the volcano absorbs rainwater like a sponge. The park has open reservoirs to store water for human consumption during times of drought. Mendez was proud of this park; it is a symbol of his government's effort to preserve the land and encourage tourism.

We ate lunch at Cafe del Volcan, located on the road to Boquerón. The restaurant began as an experiment by owners of a plantation when coffee prices were low. They built their café in a mountain forest near the volcano and created a native garden. Their goal was to attract foreign visitors. It worked. While we ate, a group of locals celebrated a special occasion in style. Mendez was excited to share the beautiful surroundings.

By the end of the day, we had met his American fiancée, Monica, discussed religion and politics, and exchanged stories about our completely different lifestyles. He wanted to help me share this story.

Entrepreneurs, who take risks and support counter-violence efforts, help build the tourism industry. Agriculture, tourism and the development of sustainable coffee farms could be the key to this country's successful future. The Rainforest Alliance (a nonprofit organization) works with SalvaNATURA, the leading environmental organization in El Salvador, and members of the Sustainable Agriculture Network (SAN) to teach farmers about biodiversity. The Web site: www.rainforest-alliance.org/locations/el-salvador/index.html, states, "Sustainable coffee can support nearly the same biodiversity as primary forest."

Biodiesel (an organic fuel made from plant oil) production began when a pilot plant was built in 2006. The goal was to provide clean renewable energy, create jobs and boost the agriculture sector.

El Salvador is a country in recovery. The conflicts from their past are slowly evolving into a commitment for peace. Citizens, like Mendez, work towards building a strong economy and sound environment. El Salvadorian leaders are building strong ties with foreign countries. In 2001, the United States dollar became their currency.

Today, the country lacks luxuries the average tourist seeks. However, El Salvador offers diverse geography, incredible surfing and breathtaking sunsets. Opportunities to experience a true third world lifestyle are rare. I am thankful for my visit.

In the courtyard at Takuani Kal stands a monument with a crucial global message/warning. It states, "When we show our respect for other living things, they respond with respect for us."

I returned home anxious to spread those wise words of wisdom. §

Donna Bonnell is a writer in Newberry. She may be contacted at Donna@towerpublications.com
Posted by www.salvaspan.com at 5:32 PM 2 comments: 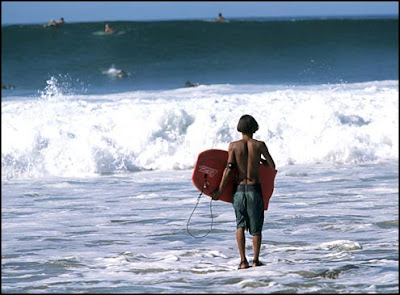 Posted by www.salvaspan.com at 7:45 PM No comments:

Places to stay in El Salvador